After recently watching Dan Ariely's documentary, (Dis)Honesty – The Truth About Lies, a film about humans tendency to lie, I was drawn to how some of the research he presents could be used to further the field of human factors (HF).

As any HF practitioner will tell you, we work in a multidisciplinary field involving engineering, psychology, design, and ergonomics, to name a few contributing disciplines. Often left off the list, however, is economics. Economics often brings up thoughts of comparative advantage, opportunity cost, and the dreaded supply & demand graph that seems to be used for everything. At face value, economics doesn't really seem to fit with what human factors engineers (HFEs) do. We tend to think of our job as improving the design and usability of devices, not focusing on monetary issues.

And yes, I do not see much upside for human factors in these classical approaches to economics. But there is a large and constantly growing wealth of research in behavioral economics, a field of economics that applies psychology to understand and explain human decision making.

As an aside, I think there is a particularly fitting analogy explaining how behavioral economics and human factors are related. Economics is to behavioral economics as engineering is to human factors. Both engineering (yes I know this is a very broad term) and economics are rule-based-systems where the output, if properly designed, will function, albeit in a vacuum. You can design a product that will work perfectly in every situation, however if the force required to initiate the mechanism is too high, it is essentially useless to the user. Similarly, a "law" of economics may perfectly describe financial behavior if everyone acted rationally, but in practicality the "law" is meaningless.

We do not live in a closed system and humans are prone to errors and misjudgments. Just like HFEs designs products for the user in the manner which they would REALISTICALLY use them, behavioral economics considers the how humans ACTUALLY make economic decisions.

Getting back to the issue of how human factors can benefit from behavioral economics, there are countless studies that have practical application for how HFEs can integrate behavioral economic research into designing new products. I will describe just a couple examples that can immediately alter your understanding of human decision making and alter how you design products to best meet the users’ needs.

Sometimes extraneous information can be beneficial

In a fascinating TED talk, Ariely discusses the potential benefits of extraneous alternatives. While subscribing to The Economist, he was confronted with these options: 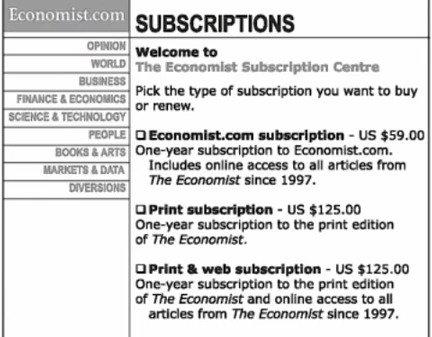 Given the options, he was confused why anyone would choose the print only subscription when for the same price you could get the print & web subscription— an objectively better deal. If it is extraneous, why include it?

As a HFE, I completely agree (at least I used to). Why offer an extraneous option when it can potentially confuse the user or complicate the subscription process. Usually, the simpler something is the less room for error, and the better overall user experience will be.

He then repeated the study after removing the print only option. Surprisingly, during this second study he found that 32% chose the print & web subscription while the remaining 68% chose the online only option, almost completely opposite results from the first study.

Ariely credited this difference to the idea that the objectively worse, and seemingly meaningless, alternative made the print & web option seem more desirable and caused the outcome to change. Having two similar options where one is clearly inferior causes the alternative to seem that much more desirable. He has repeated this effect in other situations as well, including physical attractiveness and travel plans.

The implications for product design can be huge. Let’s imagine we are designing a smart blood glucose monitor. The device will connect to your phone and transmit your glucose data to your doctor once you set up your profile. Knowing the user would like the option to take a glucose reading immediately, we do not want to force setting up a profile right away. However we do not want users to push off setting up their profile indefinitely. Maybe there would be an intro screen showing two options:

We would try to encourage users to set up their profile through emphasizing the first option or some sort of warning. However, according to this research, there may be benefits to having the intro screen show options such as:

Now, the setup only and the measurement only options seem somewhat inferior, and may make the first option more appealing, increasing the percentage of users who might set up their profile. While we are always cognizant of giving the user options to use the device as they want to, we also want to guide them into the actions that improve functionality and safety of the device.

There is such a thing as too many options

People love options, whether it is 100+ channels of TV to choose from, the plethora of chip flavors at the grocery store, or a wardrobe full of clothes that you pick from each day. The more choices we have, the closer we are able to get to our ideal option. Plenty of psychology research has shown a link between the number of options we have and an increase in our perceived level of control, intrinsic motivation and life satisfaction.

But too many options can be detrimental to making decisions. In a well known study on decision making, Sheena Iyengar set up a booth offering jam tastings at a high-end supermarket. During one trial she offered 24 flavors of jam, and during the other trial offered 6 flavor options.  While the trial with 24 jams attracted 60% of passerby to the booth, only 3% of those were able to make a decision and purchased a jam. However, the limited-variety trial attracted less people, only 40% of passerby, but 30% of those made a purchase.

Decision paralysis, as it is often referred to, is when people have too many options and freeze, leading them towards making decision based on what they are familiar and comfortable with, instead of deciding based off of rational thought and higher-order thinking.

Often HFEs are asked to provide options for a client to choose from, whether that be for hardware design(body shape, aesthetics, button placement, etc.), recommendations for how to change a particular feature, or even options for the layout of a user interface. It is important to remember that too many choices can be detrimental, and can cause people to fall back on what is familiar.

I was recently on a project where during a user study we showed participants over 15 different options for a product and asked participants to pick their preferred design. Did people experience decision paralysis and choose something they thought looked familiar, or did they pick based off of their favorite?

Regardless, going forward there are ways to avoid this situation. Yes, you could simply reduce the number of options you provide, but you may not get the level of granularity you are looking for. What if, for instance, you showed a participant 6-8 options and asked them to describe the aspects of each device, if any, they prefer. Instead of creating all the potential options for the participant to choose from, you are providing the building block and asking them to "create" their own ideal design.

The default option is a powerful tool

Classic economics would say that people make decisions by weighing the costs and benefits and deciding based on their best interest. As such, if you have two options it shouldn't matter which one is the default option since people will weigh both options equally. This seems reasonable if humans were rational creatures, however as I have pointed out here and here, we generally are influenced by unconscious thoughts, pushing rationality and conscious decision making out the door.

However the default choice has been shown to be a powerful factor in how people make decisions. In neighboring countries with similar cultures, the difference in the percentage of people signing up to be organ donors varied by as much as 87%, depending on if users had to opt-in or opt-out of being a donor. Similar effects are seen in opting-in vs. opting out of a 401K plan. Some companies have seen a 90% difference in participation when switching the default option to automatic enrollment.

Some credit this effect to a form of decision paralysis. Not due to the large number of options, but to the difficulty of the options. Both organ donation and retirement savings are important issues with weighty outcomes. Since the consequences of the decision can be so large, it is easier for us to just accept the default, as opposed to giving the necessary resources to fully evaluate the choices.

Using the example above of blood glucose monitor, instead of letting the user choose from the options on the intro screen, it could be more beneficial for the default to take you directly into setting up your profile with an option to skip setup and take reading immediately. Instead of giving the user a chance to pick, we are making the preferred decision for them, while giving them the option opt-out if necessary.

Though HF is already an established field, there are always opportunities to learn from other disciplines. Using behavioral economic theories can help shed light on decision making, allowing us to design better, more intuitive, products. 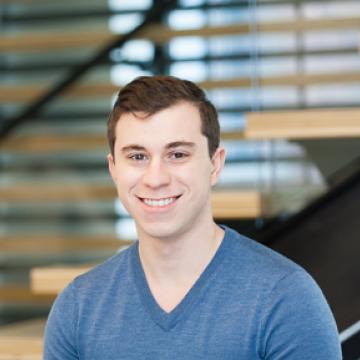 Ben is a Human Factors Engineer. He has a background in psychology and neuroscience. 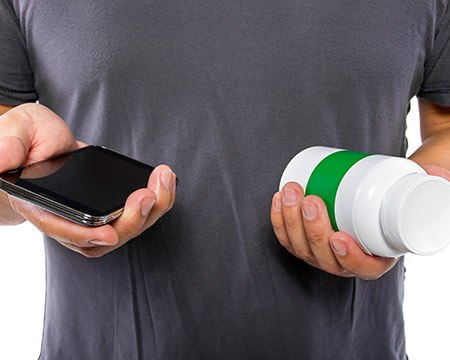 The secrets of behaviour change in medication adherence

Behaviour change. It may be one of the most common buzzwords in digital health right now, but how do we actually change behaviour through digital interventions? This is a question we’re often asked by clients looking to improve medication adherence rates... 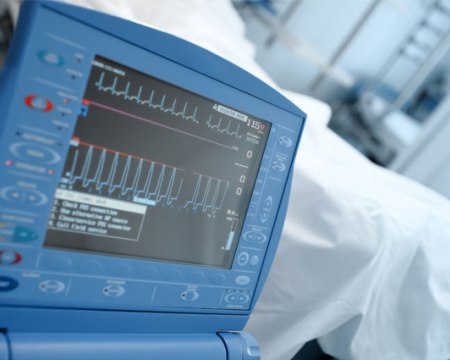 Anyone who has spent time in a critical care environment will be familiar with the sound – amongst the backdrop of clinical conversation, busy movement of people and the hum of machinery is a chorus of ‘pings’ and  ‘bleeps’ demanding... 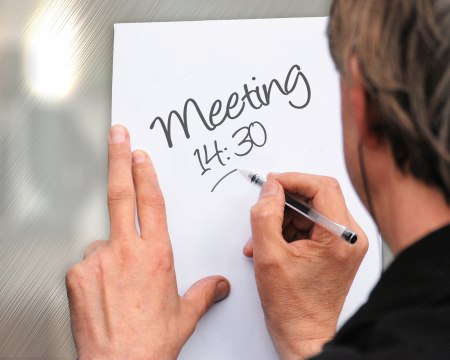 Most of us have been in a meeting that has not gone as planned - how can human factors help? 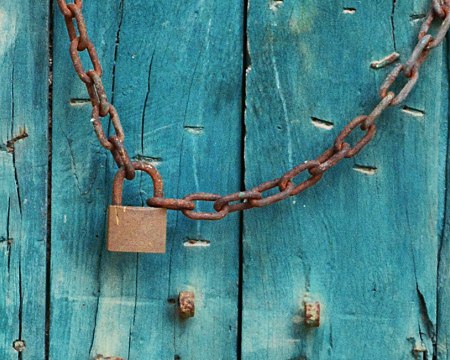 Unlocking the Value of an Expert Review