Low and no alcohol beer has been around since the 1980s, but until recently it’s never really taken off. Products were often a compromise, being poor imitations of the parent brand with little choice and a lacklustre experience when out socialising. But in the past 12 months there’s been a revolution in the total non-alcoholic drinks sector including beer, with great tasting products launching at an increasing pace giving consumers more choice and better experiences.

In Spain non-alcoholic beer represents around 14% of the market and you can buy it on draught in most bars so you can enjoy it in the same way as your regular beer.

The big players have stated big plans for this sector with many citing that 20% or more of their portfolios will be no or low alcohol within the next 5 years. 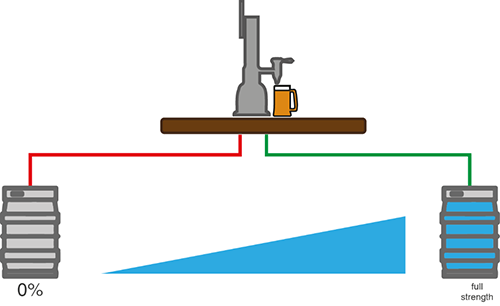 This is all great stuff and I now buy more non-alcoholic beer than normal beer, but I’m frustrated by this all or nothing choice, and I want a bit more of an experience especially in an outlet.

My beer, my choice

What if every time you ordered a draught beer at the bar, you could choose to dial the alcohol strength up or down depending upon your needs and occasion. Perhaps the barman would dial in your choice into his infinite blending font or YOU could control it from your mobile device.

What if you could download your order information to your smart watch or mobile to keep a record of the units you’d consumed to build up a diary of your consumption over time?

Delivering a tuneable alcohol level beer would be a distinct step change for the average bar setup, needing a custom solution to the under-bar and/or cellar system. Conventionally there’s a single keg and single tap for each beer, but a tuneable solution would require the blending of two or more beers from separate kegs prior to reaching a single tap. To get a full range of ABVs, kegs of both full strength and of 0% variants of the same beer would be required.

Accurately dosing the two beers would be critical to ensure that the requested ABV that fills the glass is within say ± 0.1% ABV, as well as careful consideration to ensure the other product specifications such as target carbonation level, serve speed, and serving temperature, are not disrupted by the blending process.

How do you brew?

Only recently has it been possible to brew near-indistinguishable versions of full-alcohol counterparts. There are a number of ways to produce low-alcohol beers including the physical removal of the ethanol from the beer (de-alcoholising), or a restricted fermentation in order to halt the production of ethanol in the first place.

De-alcoholising removes alcohol from a fermented beer by vacuum distillation and/or membrane filtration such as selective semi-permeable membrane, reverse osmosis, or osmotic distillation. Restricted-alcohol methods typically make use of alternative yeast species, such as maltose-negative yeast. Additionally, now genetically modified yeasts are available that have been altered so as to not possess the alcohol dehydrogenase enzymes thereby preventing them from creating ethanol during fermentation. The key here is to minimise or prevent ethanol production, whilst still producing other desired compounds during a normal fermentation as necessary for making the beer still taste like beer. Modification of the normal brewing parameters such as utilising high temperature mashing, pressurised fermentation, and the use of adjuncts to limit the fermentability of the wort, can also further reduce the potential for alcohol production during a normal fermentation.

Depending on the method(s) used, often many of the volatile aromatics and smaller molecules are either lost during dealcoholisation (e.g. through evaporation with the alcohol fraction) or are not generated in the first place (e.g. when using alternative yeasts). To get the beer tasting right again, the compounds have to be added back into the beer prior to packaging. 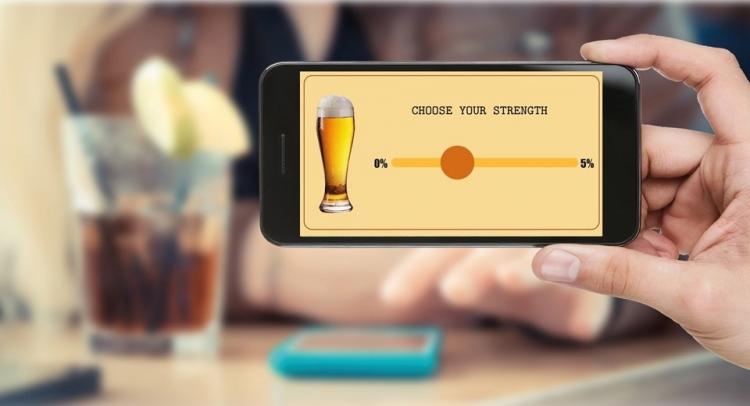 As well as providing opportunity for beer personalisation, there are unique opportunities for brewers or bar owners to create bespoke app experiences or increase brand engagement, by allowing consumers to tune their own ABV level and interact directly with the beer font via their smartphone. Having attended the last Drinktec, it is clear that IoT at the bar, on the font, and even within the cellar, has been making some serious headway, by adding connectivity through the likes of Bluetooth or NFC, and even Augmented Reality via smartphone apps. Allowing consumers to engage via an app can additionally provide data insights, such as trending beers, influence of location-related factors such as weather, advertising, sporting events, etc.

We wondered if there may be some tax savings to be made by the bar or brewer by using a beer tap with a tuneable alcohol level; and indeed there may be, but that depends on the region.

In the UK and much of Europe, beer is taxed proportionally to the alcohol content (ABV%), with tax breaks for lower alcohol beers (UK: <2.8%), zero tax for low alcohol (UK: <1.2%) and higher levies for high alcohol beers (UK >7.5%). A 2.5% beer blended from 0% and 5% beers in the UK would be subject to over double the level of duty than if it had been brewed at 2.5% (£0.32 vs £0.14 per pint), as the 5% beer would not have benefited from the <2.8% discounted duty rate when leaving the brewery. However, in many other markets, such as China, USA, Brazil and soon Japan, beer tax is neither tiered or variable with ABV, meaning a reduced effective rate of tax for the final blended beer may be possible (local law dependent), or at least not result in over-paying tax as in the case of the European tiered duty system!

One additional challenge with low alcohol beers is the additional risks of microbial contamination, as the usual anti-microbial effects of ethanol is no longer present in the beer. As well as the possibility for beer spoilage, microbes will act on sugars causing the ABV to increase after packaging. Clearly, this could be a big problem if someone has purchased what they think is a low-alcohol product whereas in fact the ABV has climbed higher than what is written on the label. Keeping micro contamination in-check is particularly of concern for beer on tap compared to cans/bottles, due to exposure to air at the font and potential for contamination during tapping of the keg.

A beer tap incorporating functionality to tune the alcohol level for each beer dispensed is an interesting and very relevant concept in today’s beer market. Given the booming growth of low alcohol beer and associated health benefits, a tuneable tap would enable a greater choice for the consumer, enable them to personalise their drink to their tastes and situation, as well as providing a new experience through increased engagement between the bar, brand and consumer. I’ll drink to that!

Novel approaches to customisation and personalisation in the world of beverages is something we’ve explored extensively, such as our hop-infusing beer font, Hoppier; and our intelligent on-demand wine blending system, Vinfusion. We have a wealth of experience in bringing novel products to market to address new and growing trends in the beverage sector, through the use of strategic insight, science-led innovation, technology transfer, and creative thinking. Get in touch if you’d like to know more. 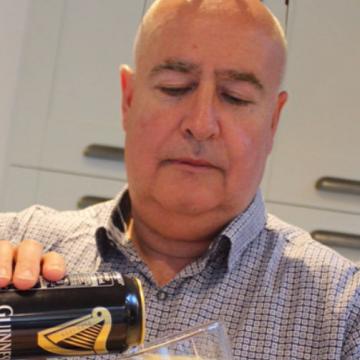 Mark has over 3 decades of experience in beverage development and innovation. He is a Master Brewer and has held a number of technical director roles in the beverage industry.