What is the UK Gender Pay Gap?

MEAN GENDER PAY GAP
The mean gender pay gap is the difference in the average hourly pay for women compared to men, within a company.

MEDIAN GENDER PAY GAP
The median represents the middle point of a population by taking all salaries in the sample and lining them up in order from lowest to highest to identify the middle salary. The median pay gap is the difference between the hourly pay rate for the middle woman compared to the middle man.

We run an identical bonus scheme for men and women which includes a qualifying period from date of joining before bonus payments are made. Employees who choose to pay their bonus into their pension still need to be included in the calculation.

During 2021 bonuses were paid out twice during the year.

Our pay gap is primarily caused by three main factors; there are more men than women working at every career grade, roughly half of the gap is due to more women being employed in administrative roles (Executive Assistant, Administrator, Receptionist).  We also have fewer women in senior roles in the company than men, which is not uncommon in the technology industry and is something we are actively trying to address.
Whilst we have made positive progress in reducing our Gender Pay Gap since 2017, it remains larger than we want it to be.  In 2021, we have seen continued improvement in all aspects of our pay gap reporting requirements.
The number of women in the lower quartile has reduced while numbers of women in the lower mid, upper mid and upper quartiles have all increased. The number of women in the organisation overall has not significantly increased since 2020 which suggests an increase in the number of women we are recruiting or promoting into roles within the upper quartiles. This change will likely have contributed to the improvement in our mean and median hourly pay gap.
Although we are moving in the right direction we are committed to driving further diversity at every level of the organisation, including greater representation of women in senior roles. 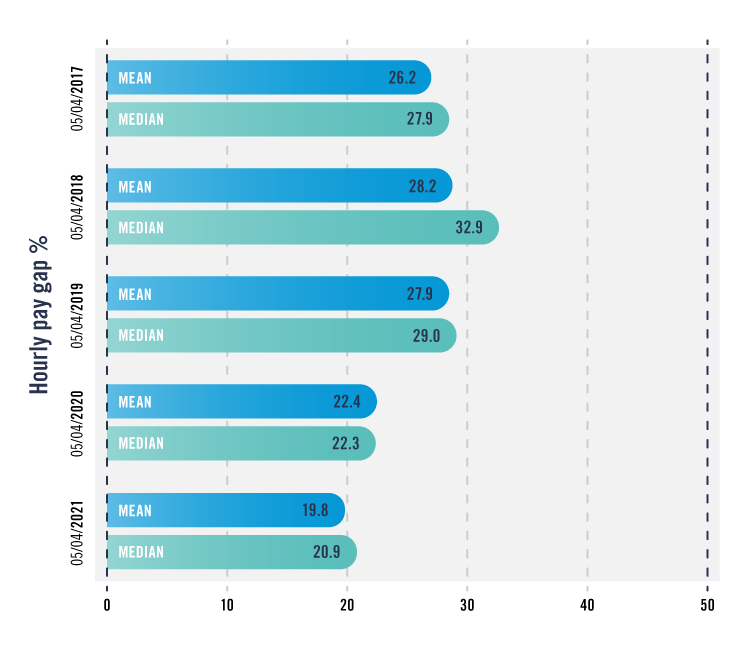 What is Cambridge Consultants doing to address the gap?

We recognise the importance of addressing the gap and that it will take time to create long-term, sustainable change.  At CC we strive to create an inclusive culture that ensures equity of opportunity for all of our people.
Early age/Outreach:
It is well recognised that there is a skills shortage for STEM employers.  With only 8% of women progressing to a level 4+ STEM* qualification and only 24%* of the total UK STEM workforce identifying as Women and only we recognise the importance of early years intervention. That’s why we actively focus on initiatives to encourage more young people to choose subjects relevant to Cambridge Consultants in early life through our STEM Outreach programme.
* Source: WISE Campaign: Statistics - WISE (wisecampaign.org.uk)
Attraction:
We have also focused on developing job descriptions and advertising campaigns that appeal equally to men and women and hope to drive greater improvements in these areas into the future. We have been more mindful of the composition of our interview panels and aim to achieve greater gender equality in our interview line-ups wherever possible. From 2022 we will be focused on developing more diverse candidate pools.
Early Careers
We have actively widened our Internship and Graduate recruitment activities through expanding the number of academic institutions and University Societies that we work with to try to improve the diversity, in background and experience, of our new recruits.
This has resulted in a positive trend with an increase in the number of women being hired during 2021 compared to prior years.
Work/life balance

We continue to adopt and promote agile and flexible working practices to help all employees balance their personal commitments.

We demonstrate a progressive approach to New Parent Leave and in Jan 2022 we launched our new Global policy giving all new parents 13 weeks paid parental leave, regardless of gender or sexual orientation. Our aim is to create gender parity in the workplace, providing either parent with the opportunity to be the primary carer. Welcoming a new child into a family is an important time for any parent and being able to support our people during this special time speaks to our culture and our values.

Our Women’s Network has been launched to create an empowered community of women and allies working together to promote equality and inclusion in the workplace.

Be part of something exceptional