Isobel Ashbey is the Tech for Good Lead within the Industrial, Consumer and Energy Division.

When the war in Ukraine began, I was left thinking, what can Cambridge Consultants do to help?

I came across Tech To The Rescue, and I was inspired by the number of projects they work on to make a positive societal and environmental impact to the world. I got in touch with them to find out what Cambridge Consultants could do to help make an impact through our Tech for Good initiative. We were able to help to formulate a strategy to focus the team of passionate people they were building around a common goal. But before I delve into what we did to help, let’s talk more about what Tech To The Rescue do.

Fancy being a part of projects that really make a difference?

The organisation was established in 2020 and has since created a community of tech companies and a community of non-profit organisations from over 60 countries who need technology to make significant impact. Their job is to help them talk to each other, and support NGO’s in formulating their request for technology. Their challenge is to connect the right NGO with a suitable tech company to help towards a specific project. It’s estimated that they have helped over three million people through projects ranging from creating a user friendly mental health support platform to a calculator that shows plant based innovation.

Tech To The Rescue were running a campaign called #TechForUkraine and were involved in multiple projects to provide support to people in need of it.

The war resulted in the biggest European refugee crisis we have seen in decades. It caused thousands of families to flee their homeland and find temporary, safe shelter. But without a system in place, people providing accommodation had no idea how to contact refugees. ID Advisory (a tax and law firm that coordinated the project) made a match-making platform for UA SOS (a combination of non governmental and local government organisations) for refugees to find someone offering suitable accommodation. An incredible 4,600 people have been matched so far. 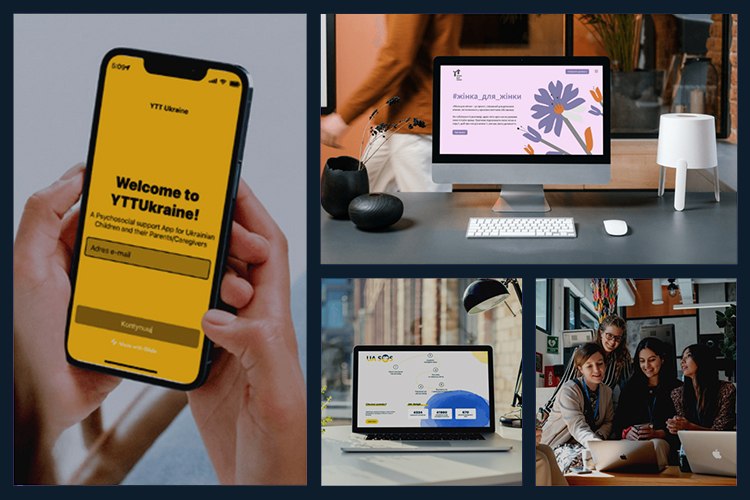 How did Cambridge Consultants make an impact?

When I got in touch with Tech To The Rescue, it was clear that they had been inundated with tech companies signing up in response to the war in Ukraine, and that the projects that Tech To The Rescue match wouldn’t make best use of Cambridge Consultants’ capabilities. It was obvious that the team was growing extremely quickly to keep up with this situation, and they needed help to compose a long term strategy to focus the team of talented people they were building. I knew this would be a great opportunity for our people with the brightest minds at CC to direct our capability towards positive change.

Through our Tech for Good initiative, we brought together a multidisciplinary team of consultants to work with them to analyse their competitive position, understand their customers (both NGOs and tech companies) and formulate their value proposition. Having this core understanding of who they want to be and how they can best live their vision will enable them to scale in the right way and bring significant impact to the world for years to come.

Cambridge Consultants shares Tech To The Rescue’s vision of making the world a better place through technology, and it has been a pleasure to help them on their journey through our Tech for Good initiative.

Watch the video to hear from Tech To The Rescue, CEO Jacek Siadkowski:

Hi Jacek, thanks for speaking to me today, I really appreciate it. I want to start by just asking: what is Tech To The Rescue?

Tech To The Rescue is a platform that lets tech companies who want to engage in purposeful projects to find their cause, and support non-profits with their technology skills. There are many companies out in the world who would like to use their talent to make something good or to make an impact, but it’s actually difficult to find non-profit organisations if you’re not in the change-making world. And it’s even more difficult to find a non-profit organisation that actually needs technology in order to progress. So we created this community of companies, we created a community of non-profit organisations from over 60 countries now, who actually need technology to do 2x, 5x or 10x more impact, and we help them talk to each other, we help NGOs to formulate their request for technology and we connect them with the most optimal company we have in the community for this specific challenge. Until now, we managed to kickstart over 230 such collaborations, which according to our estimations helped 3 million people. So we basically connect technologists to changemakers so they could work hand in hand and improve lives of many people.

Yeah it’s amazing, I really share that vision of non-profits being able to scale their impact through technology. And we got in touch with you earlier this year through the #TechForUkraine campaign that you were running. And I think we’re not alone in the companies that engage with organisations like yours through those crises. Could you explain what that situation meant for you as an organisation, and why you needed our help?

And I think that challenge of trying to define who you are at the same time as growing very quickly would be quite familiar to anyone who’s started up and grown a young, rapidly growing organisation. You mentioned the number of projects that you’ve matched and how many people those have reached, are there any specific ones that you’re really personally proud of?

Obviously yes- I am very proud on average at least once a week. I have a very favourite project which is a project from Nicaragua. In Nicaragua a lot of women die of cervical cancer because of lack of sexual education and proper screening for cervical cancer. And there is one specific NGO who is doing a lot in this space, it’s called the Lily Project and basically for the last couple of years they’ve been driving the bus around the country and providing access to nurses and doctors, education and cervical cancer screening to people in rural areas.

After a while, they understood that it’s not very scalable, and they thought about building a digital product to make more impact having the same team, but it was very difficult for them to find a grant or donor to invest in such a risky venture. So they found us, and they requested for a company that could help them build an app, and we fortunately found them a company from Pakistan, and that was a little bit surprising because of the cultural differences but we found out that the company volunteered for the project because women in Pakistan thought they should have a similar app in Pakistan. So this is a great example of how Tech To The Rescue might connect different worlds- not only in terms of technologists and changemakers, but also different cultural background and region of the world.

Yeah but this is a project from Nicaragua, we have projects from Colombia to Japan, but the most projects we’ve done for Ukraine. So since the beginning of the war we’ve matched over 115 projects, and some of them were really important. I could name a project connecting thousands of refugees with temporary shelter, or a project gathering the evidence of war crimes, or multiple platforms optimising the logistic transport of medical supplies to Ukraine. So as you can see, people who can code, people who can engineer stuff, they have magical skills to create something, and if we connect them to changemakers it might change the lives of many people.

Yeah there’s some great examples and really varied examples but showing how technology can help in completely different situations. It’s great hearing about them and it makes me really pleased that we’ve worked with you. So thank you for working with us, thank you for talking to me today, and I wish you all the best for the future.

Thank you Isobel, I loved working with you and I’m very grateful for every hour spent with the Cambridge Consultants team and I think it’s not only me but every piece of our future beneficiaries should be grateful to Cambridge Consultants because thanks to this collaboration we are more efficient, we can help more people and we are more focused on our final goal. So thank you and you should be proud of improving lives of many people through Tech To The Rescue.

Thank you very much Jacek. 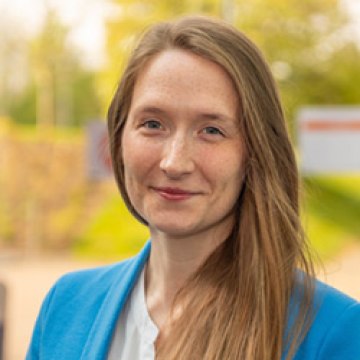 I look for opportunities for CC to have a positive impact on key societal and environmental issues by collaborating with organisations who need help with multidisciplinary technology innovation. 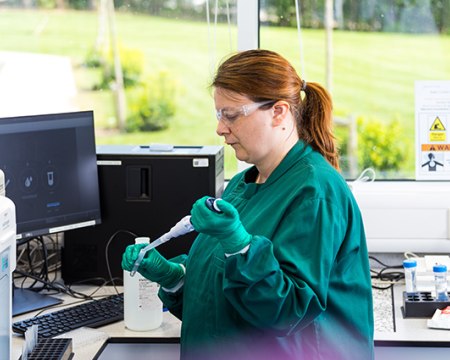 My career journey as a woman in STEM

Being a woman in STEM is something I am proud of. Subjects such as science, technology, engineering, and mathematics (STEM) have always been a huge passion of mine – and so working at a company like Cambridge Consultants that has been at the forefront of innovative development for over 60 years is perfect for me. 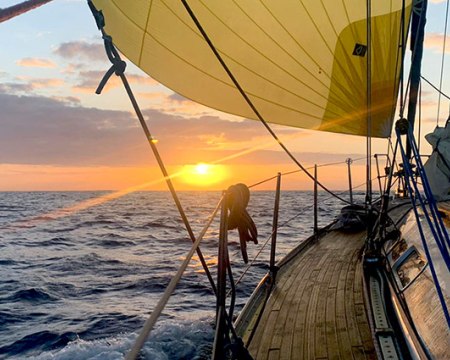 I have worked at Cambridge Consultants for nine years and while some people would see me as just a passionate software engineer, I’m more than what meets the eye – a sailing enthusiast. 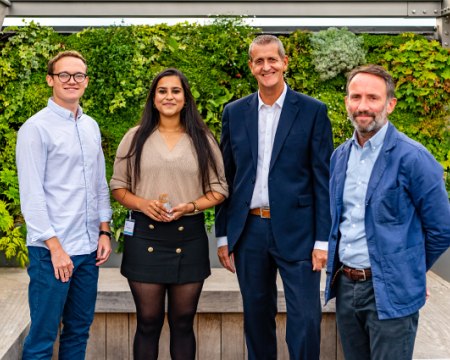 The design and technology teams working in medical technology innovation at Cambridge Consultants are passionate about improving women’s healthcare. We were delighted to welcome to CC Aashi Srivastava, the winner of Cambridge Consultants ‘Excellence in Breakthrough Design’ at the New Designers award ceremony to hear more about her perineal tear recovery kit to aid new Mums. 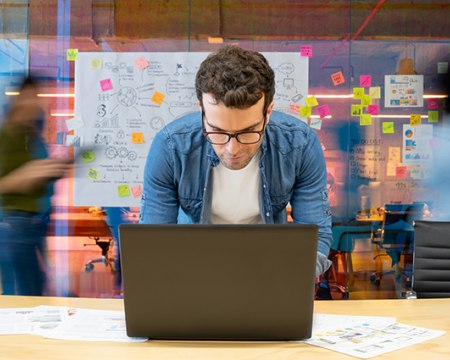